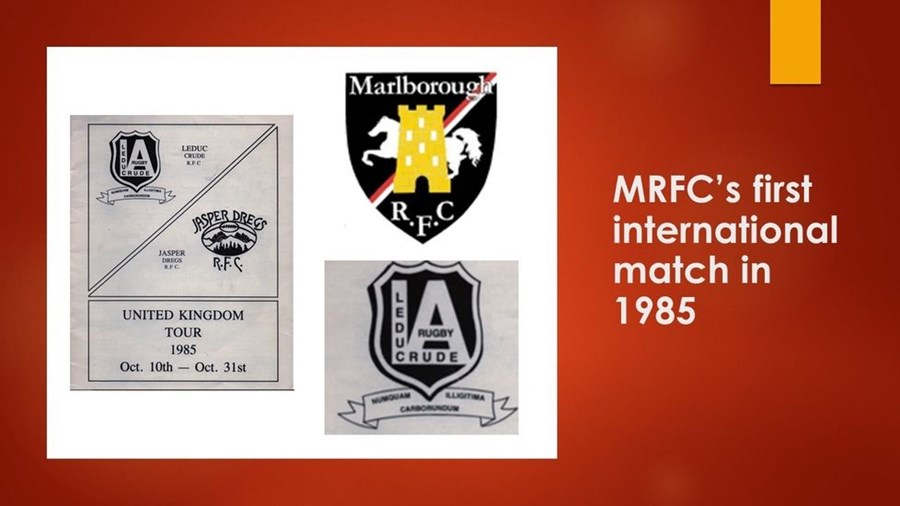 Marlborough travelled to Arborfield on Saturday to what was probably their first full international fixture. Despite problems with transport, late arrivals and the disgraceful way that one player (is this the right word) refused to travel, we somehow had 15 men and two reserves.

The Canadians looked rough, tough and mean as they proved in the bar afterwards, but Marlborough excelled with a fine return to first team Rugby from John Newman and a promising senior debut at hooker from “B.J.” (Adams). The first half saw Marlborough winning most of the early scrums and giving the dangerous backs a chance to stretch their legs. However, the first try, in fact, came from the pack with a solid scrum, a Newman pick-up and a Clement’s try in the corner. Clement’s, the doyen of the touchline admirers had a great afternoon although he suffered a groin strain by the evening. Pye, having stopped throwing up by now, failed with the conversion, but slotted over two penalties.

The other first half try saw Burkin dribble over for his first try of the season (Hayden suggesting it was a good job he hadn’t had to catch it), following a move involving all the backs in a flowing movement and then a Horwood cross-kick to set up the chance. Pye converted. Canada (it sounds better) hit back with a converted try but the magnificent back row of Scott, Newman and Hayden tackled well and kept them in track.

The second half’s start saw Marlborough hitting a purple patch with further quick tries from Hayden and Taylor and shortly after from Pye. Over confidence, however, then set in and Canada fought back with two fine tries only for Hayden to score again near the end to seal a fine performance from him and a great game for players and spectators.

Many thanks to Roy Edwards for driving a particularly unreliable minibus and to the car drivers who stood in at the last minute to get the players to the ground.

After the game we were well entertained by the visitors and singing was attempted by both sides. We now have a full set of Leduc sweaters whereas they have ours. We also have a fine gift for the Clubhouse to remind us of our friends from across the pond.

‘One sour note. Why can’t we learn to grow up after a drink or two and not terrorise families in snack bars at 9:30 pm. Is the beer too strong?’
(match report copied in it's entirety)