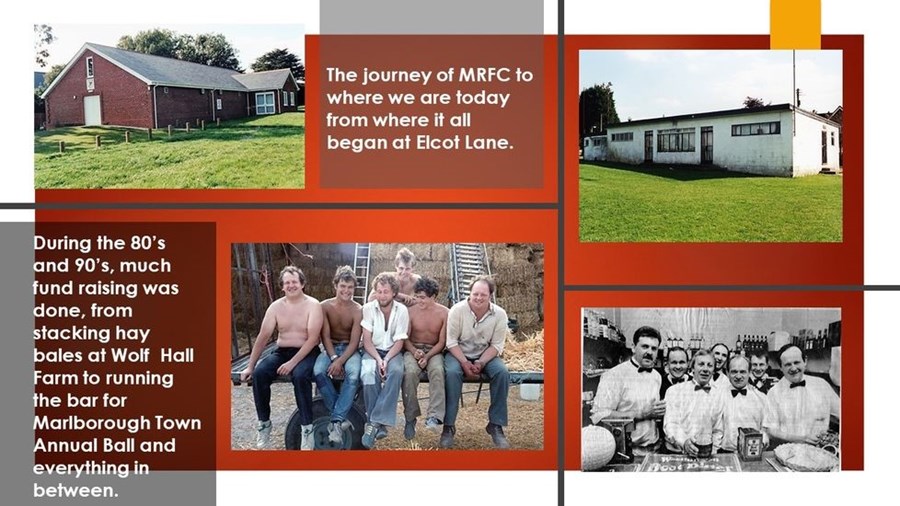 MRFC aspiration for a new Clubhouse on the Common

Marlborough RFC started its journey at a small, poorly built shack for the want of a better word at Elcot Lane. The teams would meet up here, then travel to the school up Cherry Orchard to get changed then drive up to Common to play the match. As those who know the Common, when the weather is bad, it is really bad, so the players would get drenched, filthy dirty and very sweaty, so it was back to the school to get changed and then to Elcot Lane for a few celebratory drinks or to wallow in defeat.

The dream was to have a dedicated Clubhouse on the Common, no more travelling around the town to try and play a match. Even before planning permission had been granted the Committee decided funds needed to be raised as this was not going to be a cheap venture. Though the Club wanted to move to better facilities the first team still managed to get into the Southern Counties league.

Over a number of years a huge amount of work was done by many people to raise funds.  Primary in this was Andy Ross and Richard Nocton who gave up their time to concentrate on raising the funds via Sport England. While the rest of the committee spent  their time running the club.

In the early 80’s (in order from left to right); Alec Thomas, Richard Palmer, Conrad Frysol, Tim Gent (at rear), Andy Horwood and Peter Olding stacked that years hay in the barn of David Gent of Wolf Hall Farm and the money they earned was used to help raise the funds for the dream.

Another fund-raising event was for some of the guys to manage the bar for Marlborough Towns Annual Ball in the mid-90s. So, from left to right; Graham Dobie, Neil Maddocks, John Pye, Rod Adams, Mark Gibson, Simon Horwood and Alec Thomas.

Then finally by the end of the 90’s it finally happened; the Club had reached its target with the help of a handsome cheque from ‘Sport England’ for £156,000. The dream could finally become a reality and the Clubhouse could be built on the Common after years of raising funds in all sorts of ways.