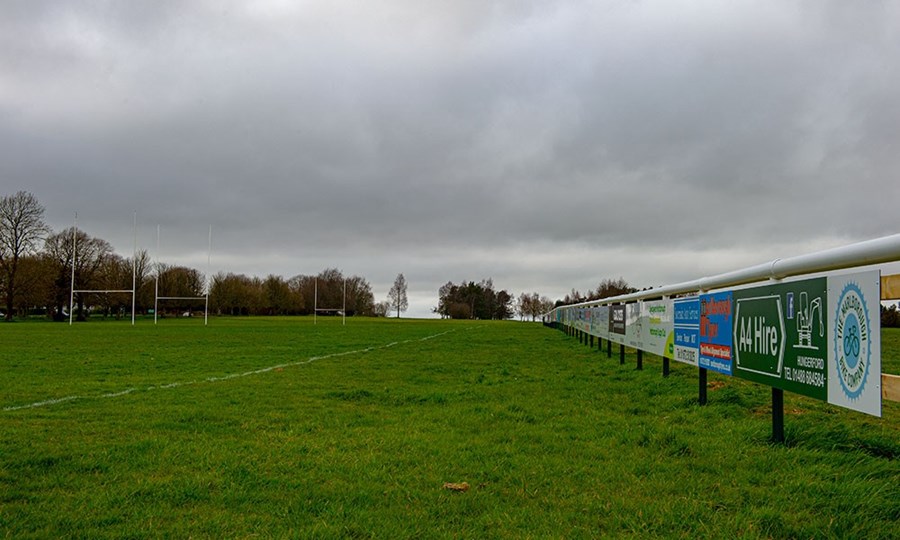 Rugby in Marlborough has had a chequered history.  From being one of the founding clubs of the RFU (the world’s first National Rugby organisation) to the current day on The Common, Rugby and Marlborough have never been far apart.

Something to set the piece up as active involvement in the formation of the RFU in the Pall Mall restaurant in Regent St is something that very few contemporary clubs can ever link back to.  This sets Marlborough apart from just about every other club, whether ‘Nomads’ or MRFC, which still incorporates the Nomads identity and lineage today. Marlborough Public School formed their own team in 1861. ( Now known as Marlborough College).

In 1868   Marlborough was represented in the rugby world as Marlborough Nomads.They played in red, white and blue vertical stripes.

This team comprised of masters and ex pupils from Marlborough College and army personnel from the local army camps at Tidworth and the surrounding area. A relationship which is still happening today and is as strong as ever. Unfortunately, the team played all its rugby at various grounds around the London Area, Richmond ,Blackheath, West Kent, The Gipisies and Ravenscourt Park,as they had no base.

Marlborough Nomads were a well known, and respected Metropolitan Club. In 1911 they amalgamated with Roslyn Park. The Nomads had several English Internationals through their existence.Including Alfred St.George Hamersley, he was also Instrumental in the formation of the RFU. He was their first secretary, he was also a major influence in creating the rules of rugby football . Based on the rules of Marlborough College football code. Where no hacking was allowed.( This was a practice adopted by schools at this time). He introduced rugby football to the youth of South Island of New Zealand and also into British Columbia in Canada, and brought about  Vancouver RFC, he was also the Rugby President of British Colombia .In 2015 Marlborough College have named a sports field after him and it is called The “Hamersley” Field.

He was a solicitor and barrister in London ,as was many of those who was at the original Pal Mal Restaurant  In 1872 when the RFU was formed.This is probably why the rugby community refers to rugby laws rather than rules. At this meeting the average age was reported to be 23.

in 1930 a Marlborough RFC reformed and played up to the second World War. They played in Royal Blue Shirts and white shorts. They first played on a field at the top of Savernake Hill near to Savernake Forest .In 1934 the team played on the Marlborough Common for the first time , adjacent to “Free’s Avenue”.Their base was the Sun Inn, where they showered and entertained the visiting teams.

In 1967 the revived team played their first fixture against customers of the Sun Inn. The Sun Inn being represented by the “Sun Downers”. It was a close match resulting in a 3-0 victory.A penalty was given to M.R.F.C. after a crooked feed by scrum half Roger Swanton.The Match was designed to be a prelude to the 1967 season, and sought to generate support in the Town.Following this match a fund raising event of cheese and wine was held in the Town Hall.Their colours were Amber shirts and white shorts. This was the cheapest strip at the time, and no other club in the area had a a similar  strip.

Marlborough RFC (reformed in 1967) had a similar situation to the Nomads , up until the year 2000 when a club house was finally secured on Marlborough Common. It was funded by the a substantial Lottery Grant, Sport England, the RFU plus local fund raising efforts. At that the time changing and showering  was done at St. John’s School, Cherry Orchard. Home and visiting teams  would play and drive the 1 mile, to and from the common in all weathers and then entertain at a small cricket pavilion at Elcot-Lane. This building was surplus to the needs of the local  Education Committee.

Back in 1978, there were merit tables based on fixtures, but no formal league as there is today. The fixtures were based on traditional fixtures !It was all unofficial!

The Daily Telegraph had it’s own Merit tables for senior teams, which include today’s Premier and Championship teams with variations due to promotions and relegations.They also did merit leagues for Ireland, Scotland, and Wales.Marlborough RFC suggested to the county that there is a place with lower teams to participate in a league system !

Howard Cripps club secretary sent out a round robin to all the clubs that Marlborough were in contact with to see if there was any interest in leagues?One reply of many was made to Howard Cripps our secretary from Vickers RFC (Supermarine),They were in favour and interested as the letter shows:-
The idea was put forward by George Haddock former Captain of Marlborough RFC.

After defeat in one of the Dorset & Wilts cup rounds, he suggested at a meeting in Elcot Lane, that if there was a league competition in rugby like football then there would be more interest and motivation for the players.At the the time rugby fixtures were a fixed tradition through out all the clubs and all the levels of rugby. Before leagues Marlborough R.F.C always played Didcot, in the first match of the season, alternating home and away in successive seasons. (This occurred for many years during my tenure as fixture Secretary.

There was no internet,’ all had to be done on the phone and confirmed in writing.So to have traditional fixtures made life easier for everybody.Clubman, Andrew Ross who had been on the Dorset & Wilts committee took George’s ideas back to them and they asked George to write a paper on the idea.The idea was picked up by Mike Meinikie committee man of Trowbridge RFC who had close contacts with Bill Bishop President of the RFU a member of the Cornwall County Rugby Committee.

The latter did a lot of hard work to get various people on board to break traditions.The rest is History! George’s “Acorn” blossomed into leagues for all ?The original letter from Vickers(Supermarine) can be found on our web site.

During late 1990’s the strips changed from amber  to black and amber, with black shorts.

When the leagues first started MRFC was put in Dorset & Wilts Division 2, through the 90’s the club progressed to the Southern Counties, and then a lot of players retired and through mis management in 2007/8 the team were demoted to Division 3 North.During this time Marlborough forged links with the  Army Camp at Tidworth ( one of the largest army garrison’s in the UK)and since then the club progressed up the leagues and are now one league of National League.In level 6. The quality of rugby and type rugby played now is greatly influenced by the Pacific Island Coaches and Pacific Island players from Fiji and Tonga.

Our current coaches are Elisi Vunipola related to the current English Stars and Tonga International Taufa’ao Filise from Tonga and Cardiff Blues.

Taufa’ao Filise He was picked up by the Blues (Super Rugby) for their 2005 Super Rugby campaign, and then signed for Bath Rugby on a year contract following that. After his season with Bath, Taufa’ao moved to Cardiff Blues for their 2006-2007 Celtic League campaign. He was part of the Cardiff teams that won the 2008–09 Anglo-Welsh Cup and the 2009–10 European Challenge Cup. On December 19, 2015 he became the Cardiff Blues most capped player with 183 first class appearances.[2] Filise finished his career playing for the Cardiff Blues in the Pro14. During his 13 years in Cardiff,Taufa’au amassed 255 appearances, with 9 tries and became a cult figure earning the nickname "The king of Tonga".[3] His final game for the club was the European Rugby Challenge Cup final in Bilbao, which Cardiff won 31-30

MRFC also have a strong Seven-a-side team’s  for Male and Female led by James Davies. Nomads still exist in the club through our Seven’s adventures and 2nd XV who are called Marlborough Nomads. MRFC also caters for all ages from under 6’s through to Colts .Our  Club Captain is currently “Welsh International Deaf” Ben Fulton, a very talented centre.
Refer to MRFC web site for more interesting information and more detail history. When on the web site. Go to INFO and scroll to history.: marlboroughrfc.rfu.club

Thanks to Alec Thomas for compiling this history and on Marlborough.news via Neil Goodwin