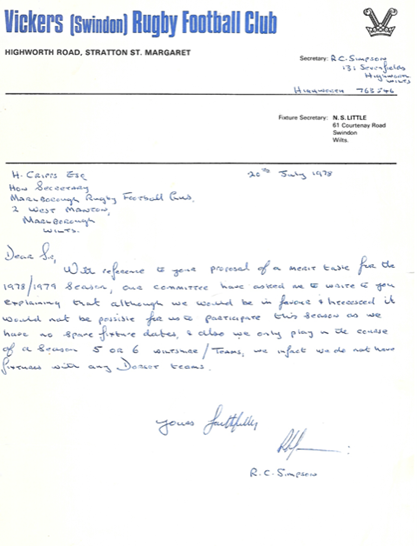 Where were the RFU official lower league concept born for lower leagues ?  Make your own mind up!
Back in 1978, there were merit tables based on fixtures, but no formal league as there is today. The fixtures were based on traditional fixtures !
It was all unofficial!
The Daily Telegraph had it’s own Merit tables for senior teams, which include today’s Premier and Championship teams with variations due to promotions and relegations.They also did merit leagues for Ireland, Scotland, and Wales.
Marlborough RFC suggested to the county that there is a place with lower teams to participate in a league system !
Howard Cripps club secretary sent out a round robin to all the clubs that Marlborough were in contact with to see if there was any interest in leagues?
One reply of many was made to Howard Cripps our secretary from Vickers RFC (Supermarine),
They were in favour and interested as the letter shows.
The idea was put forward by George Haddock former Captain of Marlborough RFC.
After defeat in one of the Dorset & Wilts cup rounds, he suggested at a meeting in Elcot Lane, that if there was a league competition in rugby like football then there would be more interest and motivation for the players.
At the the time rugby fixtures were a fixed tradition through out all the clubs and all the levels of rugby. Before leagues Marlborough R.F.C always played Didcot, in the first match of the season, alternating home and away in successive seasons. (This occurred during for many years as Alec Thomas a long serving fixture secretary remembered).
There was no internet,’ all had to be done on the phone and confirmed in writing.
So to have traditional fixtures made life easier for everybody.
Clubman, Andrew Ross who had been on the Dorset & Wilts committee took George’s ideas back to them and they asked George to write a paper on the idea,  The idea was picked up by Mike Meinikie committee man of Trowbridge RFC who had close contacts with Bill Bishop President of the RFU a member of the Cornwall County Rugby Committee.
The latter did a lot of hard work to get various people on board to break traditions.
The rest is History!
George’s “Acorn” blossomed into leagues for all ?
A letter received by Mr. Howard Crips our secretary in 1977 as proof that a Dorset & Wilts league was being considered, as a result of George Haddock’s s initial thoughts.
it reads.
Dear Sir,
“with reference to your proposal of a merit table for the 1978/79 season, our committee have asked me to write to you explaining that although we would be in favour and interested it would not be possible for us to participate this season as we have no spare fixture dates and also only play in the course of a season 5 or6 Wiltshire Teams, we in fact do not have fixtures with any Dorset Teams.”
Tweet
Tweets by @MarlboroughRFC