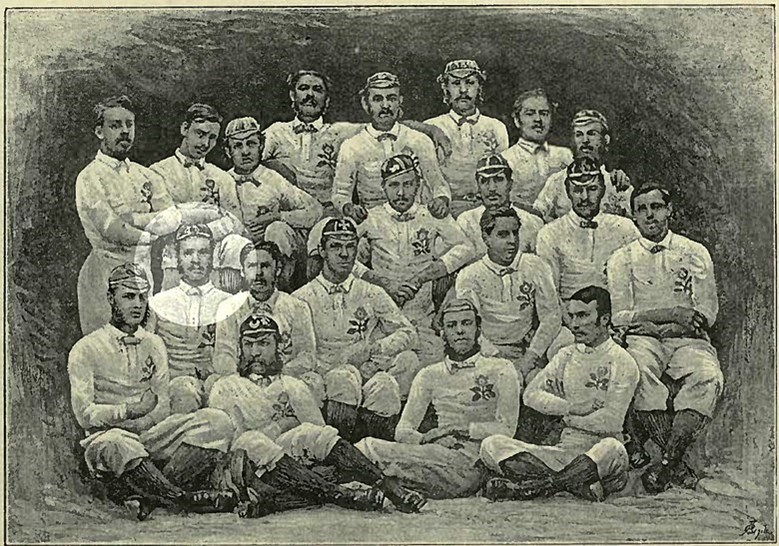 The History of Rugby Football at Marlborough is already well documented on the website. The "Marlborough Nomads" team was made up of mainly Marlborough College Masters and Army Personnel from the local army camps at Chiseldon and Tidworth. A relationship which is still happening today and is as strong as ever. Unfortunately, the team played all its Rugby at various grounds around the London Area, as they had no base. Marlborough RFC (reformed in 1967) had a similar situation up until the year 2000 when a base was finally secured on Marlborough Common.

I have detail about some of the early matches between the Marlborough Nomads v Rosslyn Park Football Club given to me by David E. Whittam in 1990 from Rosslyn Park FC .I wish to thank the current MD of Rosslyn Park FC and Andy Higgins for allowing me to use information from the club’s library.

Rosslyn Park still uses its original name of ‘Rosslyn Park Football Club’, even though it is a rugby club. Eventually the Marlborough Nomads disbanded, and the two clubs combined.

In addition to Blackheath and Richmond, the best known and strongest metropolitan clubs of those early days were Walthamstow, Queens House, Clapham Rovers, Harlequins, Ravenscourt Park, Gipsies, Wimbledon Hornets and Kensington as well as Old Boy Clubs such as Marlborough Nomads, the  at  Old Cheltonians and the various Hospital teams. They formed the cream of London Rugby Football at that time, and it was said that to watch any of their matches was most instructive for the members of the junior clubs."

‘Marlborough Nomads’ were beaten by the ’Club’ (Rosslyn Park Football Club) on the Richmond Athletic ground, kindly lent by Middlesex Wanderers by 2 goals and 2 tries to nil.”

Over time the balls were then made to be a standard oval shape and Lindon (person/ company) created a 4 panel ball specifically for Rugby School. The RFU decided in 1892 to make it compulsory that all rugby balls are oval in shape and this is where the standardization in size and shape began.

Marlborough Nomads v Rosslyn Park: The Nomads beat Rosslyn Park by a goal and six tries to nil. Rogers, A.H. Greg and H.P.Lindsay were being most conspicuous for the Nomads."

Marlborough Nomads gained an overwhelming victory at Surbiton by three goals and five tries to a goal dropped by C.M.Sharpe and J.L.Cock ran in four tries and T.A. Cock once for the Nomads.

Also beaten several times by the ‘Park’ in the same era. In the 1908/09, in one report it says that "Rosslyn Park gave the Nomads a good trouncing”

A second win followed against Marlborough Nomads who led at half time, by a goal and a try; tries by W.J.Briscoe and J.L. de la Cour, to nil. On changing ends the Nomads added a third try from a run by K.H.Soutar. Then the Club (R.P.F.C.) took the game in hand and Cecil Dixon achieved a rare feat of dropping goals in succession and subsequently K.Mc.Dermott and F.D.Purser added tries.

A final effort by Dixon for (R.P.F.C.) who cleared the Nomad defence and passed to W.D.Shennan who had a clear run introduced the finest run of the match. The try being converted gave the ‘Club’ victory by three goals, two dropped goals, and two tries to a goal and two tries in what may be called Cecil Dixon’s match.

Although in the Blackheath and Scottish (London Scottish) forwards showed a decided superiority they had to go all out against the Nomad forwards, who scored twice, one try being converted, before the side pulled themselves together. the Club’s backs wasted several good chances but eventually Pailthorpe, Houghton and Moore obtained tries, two of which were converted. This was the last time that the Marlborough Nomads played ‘Rosslyn Park Football Club’ before being disbanded

The disbanding of the famous Marlborough Nomads was a source of sincere regret to all lovers of rugby football. Founded in 1868 it was one of the earliest of the Old Boy Rugby Clubs to be established. Like most clubs it had its ups and downs and at one time it was one of the strongest metropolitan clubs of the day. It was always most popular and played the game in every sense.

Among its best known players were Harold Freeman, A.St.G.Hammersley (highlighted in picture), F.I.Currey and F. Mills, all of whom had their International Caps in 1872.

How rugby was played in days gone by

In the early years of the RFU, there were 20 players on each side, consisting of 17 forwards and 3 full backs. This was reduced to 15 players for the Varsity match between Oxford and Cambridge in 1875, and  the 15-a-side game as we know it today was subsequently adopted with the first 15-a-side international match taking place in 1877.

Positions outside the scrum were the first to evolve. The three full backs were split with two of them moving closer to the scrum. They were initially called half-way backs, and subsequently half-backs. In Cardiff, a tactic was developed of giving a short pass to one of the half-backs who would go charging at the opposition. He was called the flying half-back, eventually shortened to fly half.

The introduction of tactics in the early 1880s, particularly with respect to passing, led to the realisation that players were required between the half backs and the full back, subsequently known as the three-quarters (half way between a half and a full!). There was initially a single centre with a wing on either side of him. Wales then introduced a second centre in 1885, largely by serendipity, when a replacement for an injured centre played so well that they did not wish to drop him for the next game. Therefore, they decided to accommodate both players, and so the three-quarter line as we know it today came into existence.

There were no specialist forward positions in the early days of rugby. For example, the first players to arrive at a scrum would form the front row. In addition, there were various scrum formations; 3-2-3, 3-3-2 and 3-4-1. New Zealand subsequently had a diamond seven-man formation (2-3-2) with the eighth man (a wing forward called the rover) who fed the scrum and protected the scrum half who was positioned at the base of the scrum.

It was to be the 1920s before specialist forward positions appeared. Wavell Wakefield of England, a strong athletic player and an excellent strategist is credited with allocating specific roles to forwards, including the use of strong, fast back row players. Subsequently, the role of the number ‘8’ evolved in South Africa in the 1930s.

A main part of play was the forwards dribbling the ball along the ground and keeping it away from the opposition.

‘Dribbling’ was a fine art and forwards rarely picked the ball up and kicking into touch was only resorted to in self-defence. When kicking-off or kicking from the twenty-five-yard line the ball was kicked down field as far as possible. High punting and long drop- kicking were much in vogue and following up was better than it is today. As a rule, for off-side was only five yards from the opponent and in most cases not more than a couple of yards was actually conceded."

The kicking of goals was the deciding factor in the winning of games, one goal counting more than tries. Where an equal number of goals was kicked or no goal at all, the issue was decided by the number of tries “.

So, goals were more important than tries.

The definition of a goal was more precise than it is today for the rules provided that ‘if the ball goes directly over either of the goal posts , it is called a poster and is not a goal’. This was taken to mean that if any part of the ball when kicked above the height of the goal posts passed over a post no goal was scored.

The present definition reads “a goal is scored if the ball has crossed the bar.”

In early forms of rugby football, the point of the game was to score goals. A try (at goal) was awarded for grounding the ball in the opponents' in-goal area. The try had zero value itself but allowed the attacking team to try a kick at goal without interference from the other team. This kick, if successful, converts a try into a goal.

This piece was put together by Alec Thomas